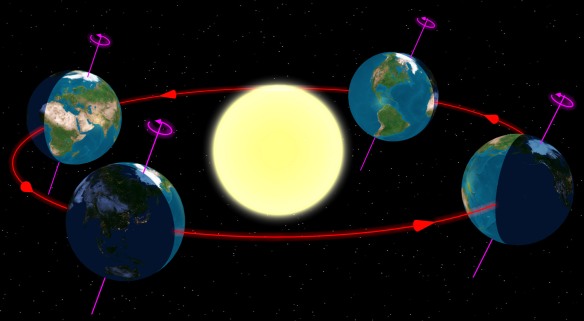 Diagram showing the Earth revolving around the Sun. Image is public domain.

Why does the Earth have seasons? This, along with other phenomena associated with Earth’s movement in space, is regularly taught throughout primary school and high school. In New South Wales, Australia, students learn the seasons from Year 3/4 through to Year 7/8.  By the time students reach high school (Year 7/8), they know that it is the Earth’s tilt and its revolution around the Sun are associated with the seasons. However, many students don’t know why or they hold the misconception that the Earth’s tilt causes the Southern Hemisphere to be a little bit closer to the Sun during some times of the year and this little bit of extra closeness to the Sun causes it to be warmer, so hence summer, and vice versa for winter. In reality, the Earth being tilted while it is revolving around the Sun results in variations of solar intensity due to varying angles of incidence. This is a very difficult concept for students to grasp. I have found the following collection of activities useful in guiding Year 7/8 students to understand the real reasons for the seasons.

Ask students to explain why the Earth has seasons. The majority of students will be able to say something about the Earth’s tilt and its revolution around the Sun. Many will stop there. Some will go on with the misconception about the slight changes in the distance between the hemispheres and the Sun causing the seasons.

Students to work in groups in an investigation like this one to explore how the angle of insolation affects heat distribution, which in turn results in variations of temperatures and daylight hours as the Earth revolves around the Sun. I find that many students experience difficulty with this activity. Not only is the concept of seasons caused by angle of insolation challenging enough, but the activity itself is challenging as it uses challenging numeracy concepts.

I find this video from Crash Course kids effective in reinforcing the concepts discovered in the investigation.

How do you teach reasons for the seasons? Do you also find that students in Year 7/8 have difficulty understanding it conceptually? What hands-on activities do you do with your students?

3 thoughts on “How to teach the reasons for the seasons”