Many people frown upon PowerPoint, It has become rather unfashionable these days. Search ‘PowerPoint’ in Google and you’ll get websites with titles like:

“Be Less Boring: The 4 Best Alternatives to PowerPoint”

“5 PowerPoint Alternatives to Wake Up Your Presentations”

Anyway, since PowerPoint has been getting such a negative spin lately, I’d like to share some a learning activity that uses PowerPoint a little differently.

My Year 8 class are currently learning about states of matter and the particle model. It is one of the most conceptually difficult science topics for middle school students. The most difficult aspect is probably because the particle model is an abstract concept. There are also many misconceptions associated with this topic. Let’s take particles of water as an example. Students often think that:

There are also a few conceptually difficult ideas that students need to grasp such as:

So with my Year 8s I decided to use PowerPoint to identify misconceptions. Their PowerPoint task looks something like this:

This activity was done over three lessons, spanning three weeks. At the end of each of these lessons, students upload their progress onto Edmodo and I give them feedback based on the medals and missions model.

Here’s an example to illustrate what I mean. 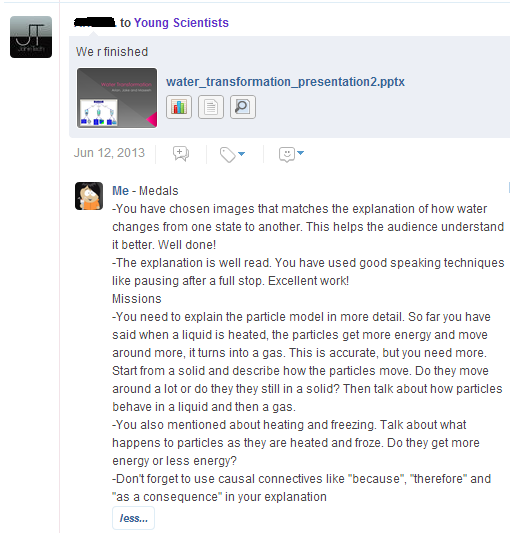 And here’s my feedback to them on Edmodo.

And here’s my feedback to another group. From their progress I was able to pick up on one of their misconceptions. 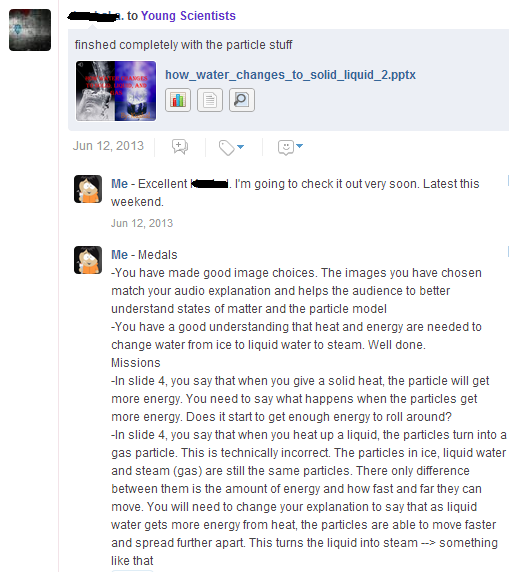 From my observations of my Year 8 students doing this activity, I have found that they actively engage with the text when they are finding images to match different sections of the text. In their groups they were often arguing and justifying to  each other which images were the best to use. I also think that this activity allows students to ‘talk science’, which will be particularly beneficial for students learning English as a second language. Setting aside time where students practise using scientific metalanguage to talk about science with each other is also something that is often neglected in high school science.

During this activity, it is also the students who are working the hardest to learn. It isn’t me showing pictures of circles and talking about the particle model. It is them talking about it and me regularly checking their understanding.

So don’t just think of PowerPoint as a boring presentation tool. It can be used as a very easy way to create a student-centred learning environment that frees up the teacher to tackle student misconceptions.