Over the past few years I have been constantly changing the way I teach due to introduction of 1:1 laptop initiatives in some classes and a continually-developing understanding of how students learn. In a lot of cases it has involved turning things upside down and completely rewriting units of work. This is tiring. Worth it but tiring. But I found out recently that small, minor changes can make a huge difference too. The Student Research Project (SRP) has been around since I was in high school. It’s an oldie but a goodie. The SRP involves students planning, doing and reporting on an experiment of their choice. It is a compulsory activity for all Year 7-10 students in NSW, Australia. Each student must do at least one SRP once in Year 7 and 8, and another one in Year 9 and 10. By doing the SRP, students learn how to design a fair experiment, a must-have skill for all scientists! See here for more info on the SRP.

It was the Year 8’s turn to do the SRP in September this year. The traditional way of doing the SRP is for students to choose an experiment, plan it, do it and then submit a written report. This year my faculty decided to revamp it and not just rehash the status quo. However this didn’t involve major changes that would stress everyone out. It involved a few tweaks that would have the most impact. Like always we gave students the choice of whatever experiment they wanted. My class were doing experiments ranging from water absorption of different types of soils to whether particular types of video games would improve people’s reaction times to using Gary’s Mod to run a simulated experiment. However instead of forcing students to do a written report, we decided to let students choose how to present their SRP findings in whatever medium they wanted. Some students still chose to submit a written report (but by sharing it as a Google document to make the feedback process more efficient) while other students chose to create Prezis or videos. Students had to justify why their chosen medium would be the most effective in communicating their findings to others. At the conclusion of the SRP, students shared their findings with their class over a two-day conference, just like real scientists.

An experiment that investigated how citrus fruits can create electricity

An experiment that tests the strength of paper towels

In the presentations I would usually get students to give each other feedback (one medal and one mission) by writing it down on a piece of paper, which I will take home and collate and then give back to students. This was a really inefficient way of doing it. Students had to wait at least 24 hours to get peer feedback and it took me time to type of the students’ feedback. This time I decided to create a backchannel on Edmodo that students used to give feedback to each presenter. Students did this by using laptops. A designated student had the role of creating a post for each presenter and then the whole class will reply to that post with a medal and mission for the presenter. Doing it this way meant that the presenter got the feedback as soon as they finished presenting; they didn’t have to wait till the next day after I’ve collated the class’ feedback. Students really liked the immediacy of the feedback they got from the Edmodo backchannel. There was also one student who made a video for his SRP, but he was ill over the two days of the presentations. His video was still shown and he was able to receive feedback on it at home from his peers via the Edmodo backchannel. 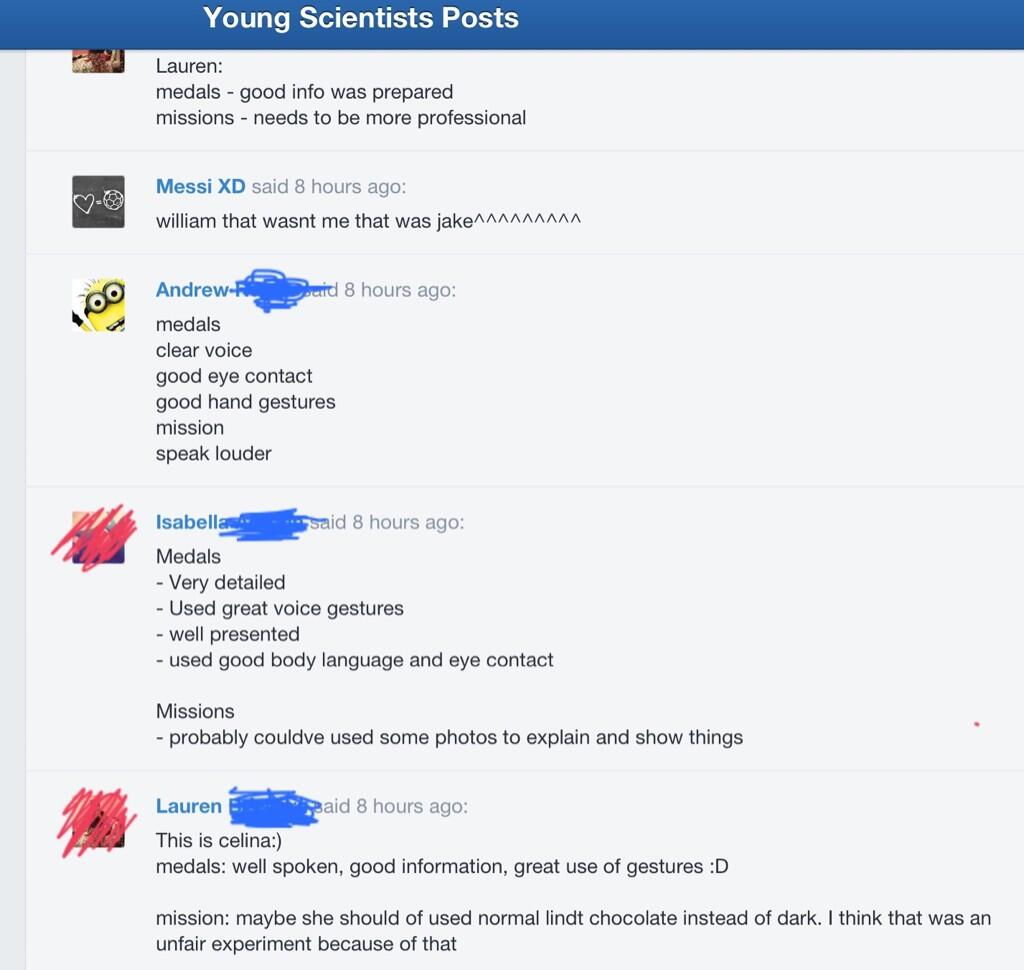 A sample of the Edmodo backchannel

So just with a little of tweaking, the good ol’ SRP has been thrusted into the 21st century. I didn’t have to completely re-write it or turn it upside down. Just by adding Google docs, more student choice and Edmodo, the SRP was made a million times better for students as a learning process. From the end-of-term evaluations, many students from across all Year 8 classes identified the SRP to be their favourite activity this term because it gave them choice, it let them use technology and they learnt by doing.

Next time I’d like to have students sharing their findings with a global audience, or at least with an audience beyond their class. But one small step at a time 🙂

2 thoughts on “Small changes can make a huge difference”