For the past 5 months I’ve been coordinating a team of 10 students to design a mobile geolocation game for mobile devices. The game is built on Aris and is designed for Year 6 Orientation Day. The team of 10 students consisted of students in years 9, 10 and 11 (15 to 17 year olds) who were part of a student-led technology team.

My older sibling’s friends said that these notes are crucial for me to find my way around the school; so therefore I won’t get in trouble from any teachers for being late to class.

The team designed seven quests based on this storyline. All quests related to major landmarks of the school that Year 6s would need to know when they enter high school. Each quest contains four items that students collect by scanning QR codes. After they have collected all the items for a quest, they go to the school’s assembly area to “exchange” their items with a quest “guardian”, who gives them a badge. Students need to collect all seven badges to receive a medallion and win the game. Here are some of the quests’ storylines:

The bell has gone for recess.

The first thing you need to do is to visit the toilets. Visit both the boys and girls toilets. Then find the toilet and collect toilet paper code. Find the toilet and collect soap code. Then head towards the canteen. This place is where you buy food for recess or lunch. There are also seating areas. Near the windows you will find a food code. Go and eat on the Quad and then put your rubbish in the bin. Go to the podium where the assembly takes place, to scan the appropriate guardian to receive your badge.

The bell rings for your next class. You stare at your timetable and notice that you have PE prac. You are unsure of where to go. You see a bunch of people going towards the back end of the school and you ask one of them where is the PE meeting area, They tell you the PE meeting area is just there where all the silver seats are at the back of the school. Go to the silver seats and you should find a basketball code.

After you meet your PE teacher, you need to change into your sports uniform. Go to the change rooms behind the hall to find the sneakers code. After you get changed, go to the hall and find the hockey stick code. Then go to the fields to find the soccer code. Finally go to the podium where assembly takes place, to scan the appropriate guardian to receive your badge.

The game was a success! There were some initial glitches that the students fixed during the day. 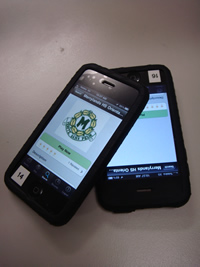 The orientation game on iPhones 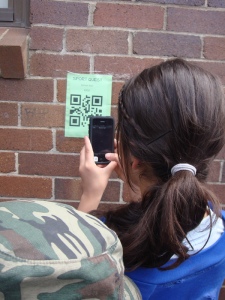 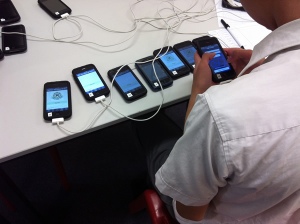 For me, this experience is much more than making a game and playing a game on iPhones. Watching the students create the game has shown me how much young people can thrive when given a challenging task in a stimulating environment. Something that traditional classroom experiences can’t offer.

The students created the game from scratch, after a very brief training session with Macquarie ICT Innovations (MacICT). The students met face to face for 50 minutes a week and a lot of work was done outside of this time. Each student had a defined role in the team (programmer, narrative writer or media collector) and they had to constantly communicate with each other (face-to-face and on Edmodo) and complete their tasks according to a timeline, which was created by the students. There were times when one team could not continue their work because another team has not uploaded their work. In the beginning, I was the one that ensured students worked to the timeline, but overtime another student took on a leadership role and began coordinating the team. In the end, I had almost no input in the game and the students did it all themselves. It was fantastic!

From making this game, the students applied their literacy skills, team work skills, project management skills and problem solving skills. The way the students worked also reflected how adults worked in real-life in many businesses. Our face-to-face sessions began with each team stating where they were up to and the whole team uploading what their goals were for the session. Each team would then go off to do what they had to do. Some students stayed in the room to program the game or write narratives. Other students went around the school taking photos. Within the narrative writing team, all students wrote the narratives for the game and one student took the role of editor and made sure there were no spelling or grammatical mistakes. Based on the narrative, the media team created images or took photos. These were then passed onto the programmers who put everything together.

So after 5 months, the students succeeded in making the game. They created a game almost all by themselves with minimal help from teachers and developed some critical skills that they can carry through beyond their school years. Young people can rise up to the challenge and do amazing things! I am so proud of them.

And thanks to MacICT for lending us the iPhones and their support throughout the game design process.

The usual way to teach this is to whack up a picture of the rock cycle, point to it and just tell students where each type of rocks come from. The teacher might bring out some samples of rocks – basalt, granite, sandstone, slate. Students look at it for 5 seconds and lose interest. No one really feels connected to the experience. This is not only boring, but most students don’t remember it. So I thought I might do it different this time.

I’ve been mucking around with QR codes for a little while now with a previous rock quiz and a geolocation game using the Aris platform. I came to the conclusion that if I want my students to know where different rocks come from, I want them to experience it and interact with the rocks in a way beyond looking at samples of rocks in the classroom.

So I decided to make a rock hunt. There’s a small courtyard near my classroom. I used Block Poster to make a gigantic image of a volcano and printed a gigantic “underground” sign. I pasted these images on the walls surrounding the courtyard and scattered different types of igneous rocks near the volcano, various metaphoric rocks near the underground sign and placed a bunch of sedimentary rocks around the place. Each rock had a QR code attached to it. When students scanned the QR code with their iPods, the rock’s name would come up. They would then need to work out whether the rock is sedimentary, metamorphic or igneous based on the location that they found the rock in. 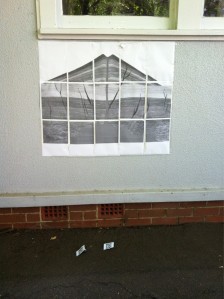 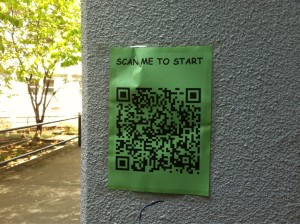 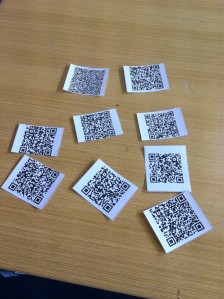 The rock hunt was a success, because students were able to produce a descriptive report on the three types of rocks after the rock hunt (most of them did so independently as well). I think the QR code rock hunt also allowed them to physically interact with the rocks in a simulated environment that mimicked where the rocks would normally be found.

The next time I do this activity, I would not only have the rock’s names on the QR codes. I would link the QR code of each rock to a short video about the rock. That way, not only are students interacting with the rocks, they’d be able to connect a classroom activity easily with digital resources.

And as a bonus, other teachers saw the QR codes and jumped onto free online QR code generators to try making their own.

Rocks can be a very boring topic. Teaching the rock cycle and getting students to engage with rocks can be difficult. I’ve been exploring the use of QR codes in the classroom lately and have come up with this idea to make looking at rocks a bit more fun.

This activity requires the Common Rocks Reference app and a QR reader app on an iPod, iPhone or iPad.

Here’s a brief outline of the activity: 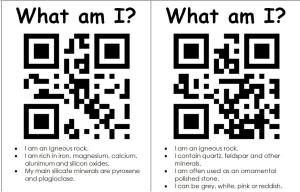 This activity can be turned into a “Who is the best geologist” game and have groups of students competing against each other to see who can identify the most rocks correctly.
A more detailed version of the activity with all the QR codes for the rocks can be downloaded here, QRcodes_rocks.
What do you think of this activity? Feel free to comment and make suggestions. 🙂
Join 14,228 other followers