Formative assessment is something I’ve been putting a lot more emphasis on over the past few years. I’m so sick of just relying of end-of-topic exams to gauge what students have learnt. I want my students to continuously question how they are going and make changes to their learning accordingly. This is one of the reasons that my faculty has embarked on a Structured Observed Learning Outcomes (SOLO) journey this year. One of the ways that many teachers using SOLO use to assess student learning is with SOLO hexagons.

SOLO hexagons involves the major concepts or ideas from a topic to be placed individually onto hexagons. Students then work individually or in groups to connect the hexagon concepts together and they must justify why they have made these connections. It is the justification where both the teacher and the student can assess the student’s learning. It is how students have connected the hexagons and their justification of WHY they have done it that way that allows their learning and thinking to then be assessed using the SOLO taxonomy (or not; the hexagon activity still works with no understanding of SOLO).

Here’s a video showing one way of using the SOLO hexagons in a UK science class.

Here’s an explanation of how to use SOLO hexagons from the SOLO guru, Pam Hooke.

I changed the hexagon activity slightly to suit the needs of my students. The picture shows the instructions that my students received.

And here are the hexagons my students used (note that the hexagons were pre-cut for students and placed into zip lock bags with the above instruction card). My students worked in groups of 2 to 4. I used the SOLO hexagon generator to create the hexagons.

Here’s some samples of the hexagons my students made. 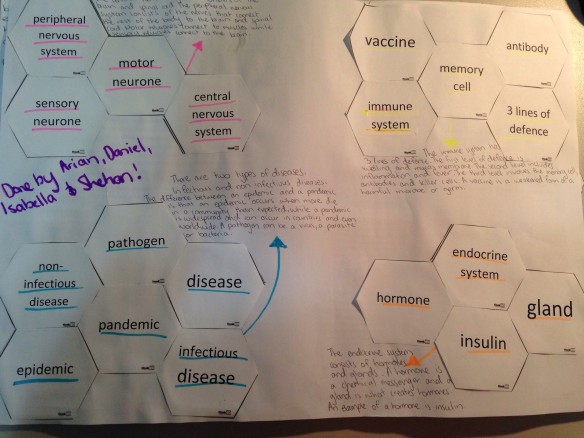 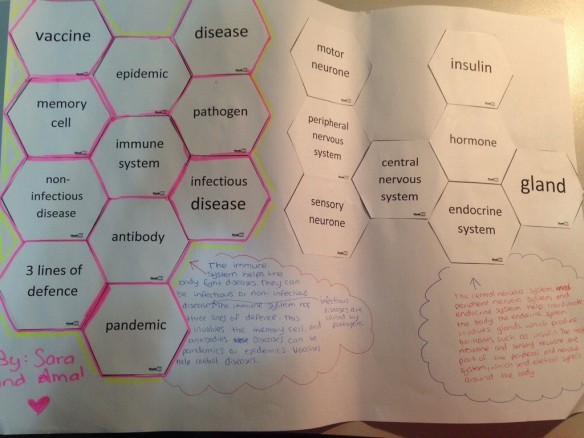 Some things I noticed was that:

The SOLO hexagon activity is definitely something I will use again with my students. Now that they have done it once, the next time will run even better. Feedback from students was that they enjoyed talking about science with each other and that they learnt a lot from each other just by listening to what others had to say about each concept.

In New South Wales, Australia, the 2014 school year is just about to start so I thought I’d share with you my 4 professional goals for 2014.

2013 was the year where I started the journey of connecting my students with current, practising Australian scientists. This was a response to our students’ survey responses that they did not know many careers or jobs that science can lead them to. They also did not know what scientists actually do. Many students have accountants, tradespeople, bankers, etc within their families or family friends but students often do not have exposure to scientists in their everyday lives (ask a student to name a scientist and they’ll still tell you Isaac Newton or Albert Einstein; they rarely name a living scientist). We wanted to make science real in the sense that we can put real people’s faces to what the students learn in the classroom. So in 2013 our school connected with Scientists and Mathematicians in Schools, where we are now partnered with scientist Melina Georgousakis. Melina has already spoken to our Year 8s and 9s on her journey to becoming a scientist, what she does in her job and explained how the immune system and vaccinations work (that’s her area of expertise). In our end-of-topic survey, a lot of our year 9s listed Melina’s visit as the best activity of the topic. In their words the best part of the topic was “when the lady came in to talk about vaccines”. In 2014 we have plans for our Year 12 Biology students to work with Melina when they explore the immune system more deeply.

2014 will also be the year where I want to utilise social media and technology to connect students with scientists, not just in Australia but from around the world. In 2013 social media led me to connect with a postgraduate student called Ash from the University of Technology, Sydney, where he came to the school and spoke to Year 8s about his work with sharks (Year 8s were learning about the role of sharks in the ecosystem and how removing sharks as apex predators impact on the ecosystem). We also connected with Dr Mel Thompson from Deakin University and Dr Karl via Skype. In 2014 I am hoping to expand to using Twitter to connect with my students with scientists. I want to create a class Twitter account for my students and connect with scientists on Twitter. There’s so many of them such as @realscientists and Dr Cameron Webb.

I was very privileged to be involved in the UTS Summer School this year where I worked with Christy, a former Questacon presenter (a science communicator who does science shows for children). She re-emphasised to me the importance of designing learning that drives students’ curiosity and create learning experiences that are memorable. One of my biggest gripes with science education is that it uses flash-bang experiments inappropriately. You hear lots of students say they just want to do pracs. You hear a lot of teachers say that all students want to do are pracs. A lot of the times I think showy experiments are wasted at school as they only serve as entertainment. Christy re-emphasised to me that showy experiments need to be set up in a way that drives students to want to know the science WHY something has happened and the journey to understanding they experience must be memorable. This can mean turning explanations into stories, plays, musical items.

One of the ideas I have this year is to have a science communication project where students work in small groups and become science communicators themselves where they design and perform an act that explains a scientific concept. If I could I’d like to make this a cross-curricular project with Drama.

This year is where our faculty applies the Structured Observed Learning Framework (SOLO) for all students in Year 9. We have used this year’s implementation of the new syllabus for the Australian Curriculum as a drive for this change. See this previous post for more details. The challenge (not so much a goal) will be to evaluate the impact on student learning.

Over the last few years I realise that looking after yourself is a one of the most important jobs for teachers. After reading this post on 10 tips for slowing down, I really want to make sure that my entire faculty’s wellbeing is well looked after this year. I tend to be someone who doesn’t know when to stop. I feel guilty when I’m not doing work related to school. When I’m relaxing it feels like I’m doing some kind of injustice to my students’ education. I love my job but I’m no use to my students if I burn out. From the post on 10 tips for slowing down, I want to make these changes:

Schools are such busy places that many teachers schedule meetings right on bell times so that we are rushing from one place to another. This year I want meetings where people are now running from their classrooms, crashing down and then expected to immediately adjust their mindframes. I’m hoping that simple things like having meetings start 5-10 minutes after the bell will avoid that rush feeling that make people stress.

Eating recess and lunch is my other goal for wellbeing this year. While this seems self-explanatory, I know many teachers don’t eat, or sit down, or even visit the bathroom during school hours because there’s just so much to do. I’m not sure how successful I’ll be at this but this year I want to reduce the number of times where I eat my sandwich while driving home.

This year my faculty have been designing units of work for the new NSW science syllabus for the Australian Curriculum with the Structured Observed Learning Outcome (SOLO) framework.(If you don’t know what SOLO is, watch this video for a crash course) The reason why we are investing quite heavily into SOLO is because as teachers, we know that self-regulation and quality feedback are the two of the most effective elements in increasing student achievement. SOLO, with its associated learning intentions and success criteria, will allow our faculty to develop our students’ self regulation skills and further improve the quality of teacher feedback and peer feedback.

As a team we decided on the following for communicating learning intentions and success criteria to students:

As a team we also agreed that we need to teach students about SOLO. We have designed different activities for students to learn about SOLO. Here’s one of the activities

As a team we also agreed to providing student feedback using the SOLO framework.

What we hope to see are:

Our faculty has also devised a draft plan to evaluate the impact of SOLO on students’ achievements and mindsets, with help from a university academic. So watch this space for more updates on our SOLO journey. 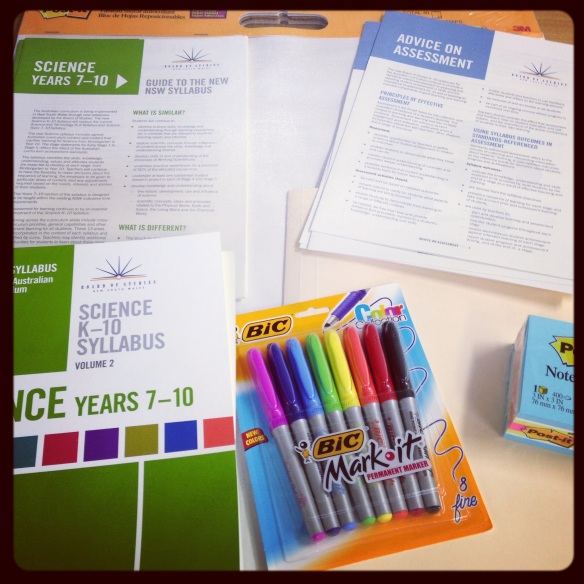 I led my science faculty in using structured observed learning outcomes (SOLO) to design learning for the new NSW science syllabus over the past two days. Like all other NSW schools, we are spending this year preparing for the implementation of new syllabuses for the Australian Curriculum. As a faculty we felt that this was a great opportunity to evaluate the effectiveness of our current teaching and learning practices. We are using the new syllabus as a driver of change in teaching and learning.

We decided to use SOLO as the framework to design learning for the new syllabus. Why did we choose SOLO? One of the main reasons is that the Essential Secondary Science Assessment (ESSA) uses SOLO to assess students’ understanding. ESSA is a state-wide science assessment that is completed by all Year 8 students from NSW government schools. An analysis of the trend data shows we needed to work on moving students from being able to recall scientific information to making relationships with this information and then applying this information to real world situations. Another reason why we chose to use SOLO is because it makes learning visible to students and teachers when it is accompanied by learning intentions and success criteria. Learning intentions and success criteria help students focus on the purpose of learning activities rather than just merely completing work. They also help enhance students’ self regulation.

(1)    Getting everyone on the same page

We started the two days by analysing where our students currently are and where we want to move our students in their learning and achievements. Why SOLO was explored. We used a KWHLAQ table to do this.

(2)    Drawing out main concepts from the syllabus

We decided to program a unit on human health and diseases first. We familiarised ourselves with the relevant sections of the syllabus and brainstormed all the concepts, ideas and facts that students needed to understand. Individually we wrote each concept, idea and fact onto post-it notes and stuck them on the whiteboard. As a team we sorted the post-it notes into logical categories.

We assigned SOLO verbs for each concept, idea and fact.

We created learning intentions and success criteria based on the verbs for each category.

We split up into three teams to design teaching and learning activities that will allow students to meet the success criteria.

We also designed an assessment task gives students an authentic context to learn this unit.

We are still in the progress of completing the unit and I will share it once it is completed. Meanwhile some of our next steps will also include

It will be great to get some feedback on how we are going so far in using SOLO to design learning.